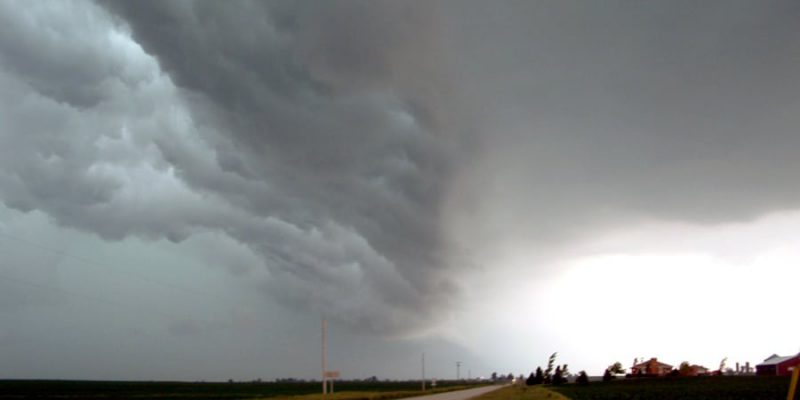 I love being in the mountains. It’s up there that I come alive. For me, nothing matches the beauty of a full moon rising over a glassy still lake or the warm sun shining through as the storm breaks. Much of the message within me has developed within the context of the wilderness.

One day, heading home from a trip on Mt. San Jacinto, not far from my home in southern California, I saw another magnificent sight. I was driving the highway off the mountain, descending into the wind gap that serves as one of the gatekeepers to the infamous Santa Ana Winds. Before me lay the visible boundary defining the collision of two enormous air masses. On my left was the cold gray air of the coast mixed with the dirty orange smog from the cities. On my right was the clear warm air of the high desert.

What was striking about this scene was that I could see the boundaries of the air masses as clearly as they are depicted in this diagram.

It was as if our loving Heavenly Father took an enormous celestial straightedge and with His majestic finger drew the red line thousands of feet high through the thin air. What lay before me was not just the visible manifestation of water vapor condensing to form a line of clouds. Instead, I was seeing the invisible distinctions of temperature within the atmosphere.

Our emotions are the indicator of the thoughts we have been believing. Our thoughts determine how we feel. Consider our emotions to be a barometer of the spiritual atmosphere. Just as low pressure in the natural atmosphere announces the arrival of a storm front, so too, can anger announce the presence of an evil spirit. Pay attention to your spiritual barometer. When two “air masses” collide (your spirit and the evil spirit), there is precipitation of some sort.

Thought leaders change the atmosphere within their sphere of influence. They are leaders in their own communities, work places, families, churches, businesses, and out in the public square. Thought leaders are concerned with creating a positive and productive environment where ever they go.

Thought leaders don’t try to take on the world or to stand out from the crowd. Rather, they seek to make their neighborhood -their sphere of influence – a better place to live. These people might be called micro thought leaders, but thought their reach is local, their influence is great.

Thought leaders are not vigilantes, roaming the streets looking to round up negativity. They don’t seek a bounty for the work that they do. Thought leaders are empathetic, caring, and authentic. They exert an influence of love over all those within their sphere because they know it is the right thing to do.

An Agent of Change

The term “change agent” was popular back in the 90’s. A thought leader is a change agent. As writers, we seek to communicate our message through the medium of writing. Our message needs to engage our culture, encourage those who seek to grow, and empower each other to walk in love.

The message you carry within you will become the force that produces change around you. What steps do you need to take to craft and release that message? Please leave a comment. I’d love to encourage you through you next move.